5 Herbs for our Time 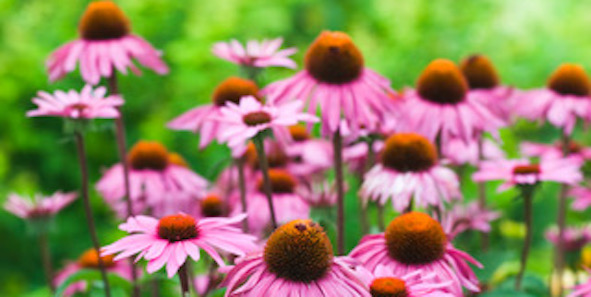 Herbal medicine has been used for many centuries and is still popular today. Our herbalist Natalia Kerkham shares some of her favourites with us.

Echinacea – the herb of the moment

At a time when our immune systems are fighting a new and dangerous threat, Echinacea is one of our best allies.  It is a powerful tonic to the immune system, prompting it to respond rapidly and vigorously to infection from any source, helping to beat it off before it can get a hold.

It’s a smart herb, too.  Research has shown that it has the strongest effect on people whose immune systems are underactive, but does much less if the immune system is already functioning well, so there is no danger of overstimulation.  It’s also very safe – it is a member of the daisy family, so avoid it if you have an allergy to plants from that family – but otherwise it is not known to have any side effects.

Ginger – the painkiller that’s good for you

Ginger is well known as a treatment for nausea, be it morning sickness, travel sickness or from any other cause.  It’s good for your digestion in other ways as well, helping to reduce wind and bloating, and when eaten regularly helps to prevent stomach ulcers.

It’s also a powerful anti-inflammatory and painkiller, comparable to ibuprofen but without the side effects.  It can be used to treat arthritis – one study found that 1g of fresh ginger root per day was as effective as an average dose of ibuprofen, although the ginger had to be taken for several days to take effect.  For period pain try taking a good pinch of ginger powder three times a day, starting from about a week before your period should start.

Cloves are another handy store cupboard medicine.  If you’ve used clove oil for  toothache, you’ll know they’re a great pain killer.  And they can also fight infections.   Put it all together and you’ve got the perfect remedy for a painful, infected sore throat.  A clove gargle brings immediate relief.

Put half a dozen or so cloves into a mug.  Pour over about a quarter of a cupful of boiling water, cover, and leave to cool.  Remove the cloves, then gargle with the liquid for instant pain relief while fighting infection.

This infusion has other uses, as a mouthwash to relieve mouth ulcers and prevent them from getting infected, or even dabbed onto cuts and grazes.  When my children were small, we used the ‘clove stuff’, soaked into a tissue, to ease the pain and irritation of teething.

Just a word of caution about clove oil.  It is far more concentrated than dried cloves and can be toxic.  For adults, few drops into an aching tooth are fine, but it should never be given to young children, as even small doses can cause severe side effects, and may even be fatal.

Chamomile to soothe the nerves and the digestion

Many of us drink chamomile tea for a healthy, caffeine-free alternative to ordinary tea.  But it’s also a powerful medicinal herb.

Chamomile is calming.  During this stressful time, a couple of cups a day can make a real difference, and a cup at bed time can help you to nod off.  It’s especially good for a nervous stomach as when taken before a meal, chamomile primes the digestion to deal with the food, reducing indigestion and bloating afterwards

It’s also great for eczema.  Stress and anxiety can make eczema worse, and we’ve already seen that chamomile can help with that.  But it’s also anti-inflammatory and so can directly calm inflamed skin.  Add a pint of strong chamomile (made with four teabags) to your bath, so that the skin benefits directly from its anti-inflammatory effect.

Chamomile is one of the very safest herbs, even for tiny babies.  It relieves colic, and helps with sleeping problems.   If you’re breastfeeding, simply drink the tea yourself and it will pass into your milk so that you both benefit.  After weaning, or for bottle fed children, homeopathic chamomile teething granules are a good choice.

Although it’s one of the safest of all the medicinal herbs, avoid it if you’re allergic to the daisy family.  You can also have too much of a good thing.  There is one case report of someone who developed depression from drinking 12 cups of chamomile tea a day.  Happily though those symptoms went away when they reduced it to 2 cups.

Garlic for a healthy heart

Garlic is both food and medicine.  Adding garlic to your diet, or increasing the amount you eat, is an easy way to better health.  Research has shown that people who have garlic daily have fewer symptoms when they get infections such as colds or flu – garlic doesn’t prevent them getting infected, but they are less ill and recover more quickly.

Garlic is particularly good for your heart and circulation.  It prevents narrowing of the arteries and lowers the risk of stroke and heart attack by making the blood less prone to clotting (for this reason be careful with garlic if you take Warfarin).  It helps to reduce blood pressure and is useful for diabetics as it lowers blood sugar.

For general health, try to eat plenty of garlic every day.  If your recipe asks for a clove of garlic, use two.  If it doesn’t call for garlic, add some anyway – unless your recipe is for chocolate mousse!

Natalia is available for telephone and Skype consultations whilst the clinic is closed, and the herbal medicine dan be delivered to you.